How long could you go without using social media? 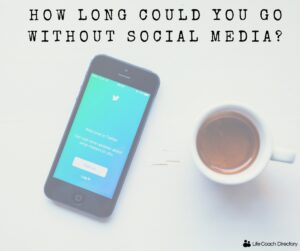 Kat, Marketing Communications Team Leader – “I probably spend 1-2 hours on social media a day, mostly Facebook, Instagram and Pinterest. It’s become habitual and I would love to reduce my time on there! I think I could go a week without it, but it would be a struggle!”

Carl, SEO Executive – “I spend about 15 minutes on social media a day, mainly Facebook, just catching up on people’s lives. I think I could go a few weeks without it, but after that I would start feeling a bit out of the loop (especially with events).”

Claire, Membership Services Executive – “I think I spend about 40 minutes on social media a day. I could probably go a couple of weeks without it, I generally like it because you get to catch up on news (media and friends), new products that are being released and upcoming events!”

Ben, Junior Software Engineer – “I spend around 30/45 mins a day on Facebook. Mainly to watch some 9gag posts or see my favourite press news posts. I can survive maybe a week or two without it.”

Ellen, Marketing Communications Executive – “I’m a major scroller, probably spending 1.5 to 2 hours a day. (Instagram and Snapchat is my weakness!) I would like to say I can go a few days without it, but I would probably give in before. I use it for motivation and inspiration so I turn to it whenever I need a boost!”

Jen, Business Development Executive – “I’m a bit of a social media addict, easily a good couple of hours a day! However, when I go on holiday I rarely use it. I reckon I could go without it for a week or two if I had too, but I do like to see what everyone is up to, and do enjoy the funny and cute videos to pass time!”

How long could you go without social media? Join us next week after some of us take the challenge!

Find a Life Coach dealing with these types of distress

Kat is a Content Producer for Memiah and writer for Life Coach Directory and Happiful magazine.

Other articles by Katherine

From striving to thriving: Freeing yourself from the inner critic
By Angela Davenport
Do you ever feel like you are behind? That you need to be better, slicker, more...
Personal development Motivation

10 questions to help you find your life purpose
By Ilse Passet - Career and Business Transformational Coach
When I read a study by Jobbio which found that only 23% of Brits are always happy in...
Personal development Confidence