Yesterday I had an incoming call on my landline. I’m usually guarded about those – most people use my mobile number – but I answered anyway.

“I’m calling about the car accident you had…” said a friendly, local sounding voice.

“Yes, what about it?” I said, not actually having had a car accident for as long as I remember.

“Did you know that you may be entitled to compensation? Were you or anyone with you injured?” asked the caller.

Well, of course, I had twigged that it was a fairly sophisticated IVR (Interactive Voice Response) system I was ‘talking’ to, but I was curious how robust it was. It took a final, and robust, reply from me for the system to hang up on the call.

Was I impressed? Yes, but in so far as I wanted, or in this case didn’t want, the service offered, and cared little about any real human interaction. The advantage of IVR systems, of course, is that they are almost limitlessly scalable and service providers, like insurance, travel, banking businesses are able to greatly speed up their response time to customer service calls. They can also perfect the customer service agent ‘patter’ and integrate callers’ interactions with data capture to allow follow up, remarking, escalation and so on.

Why my reservation about IVR?

Stock questions and answers and pre-determined pathways through a conversation may work where the exchange is never intended to be anything more than one-off or occasional and no long-term or deep relationship is needed or expected. But when one party to the conversation is pre-recorded and limited in their repertoire, there may never be the mutual trust and openness needed for more serious or sensitive dialogue.

Examples of this more important and, crucially, two-way dialogue, would be a consultation with a specialist clinician, eliciting personal medical details, or a counsellor or psychotherapist working with a damaged client on a long-term support programme. Another example might be a social worker involved with an intractable family case.

As life coaches and mentors – members of the ‘talking’ profession – we know that the practitioner-client relationship is the key to the successful outcome of any interaction. From the first encounter, there is the start of a process that leads to rapport and trust and eventually to openness and honesty.  That openness and honesty is an essential condition, an emotional chemistry, that allows a full and effective exchange of information, understanding, and agreement. Without that neither coach nor coachee can fully embrace the process of change and transformation.

The nature of the coach-client relationship has faced a massive challenge over the last ten years or so with the advent of online communications: video conference technologies, Skype, FaceTime and so on. Many feared the computer or phone screen would put a barrier between the practitioner and the client that would make effective coaching (or counselling for that matter) impossible. The technology it was assumed would interfere with the chemistry and would inhibit the building of rapport. There are still situations where that is the case and these online channels are, in some cases, entirely inappropriate, but, by and large, these new ways of interacting have become popular and well liked. In fact, online has opened up access to coaches and therapist where previously geography or timing have been a major hurdle.

So what is the issue when it comes to the later technical innovations of IVR and other AI (Artificial Intelligence) based systems?

It comes down to those words: rapport and chemistry. These two ingredients to a successful relationship are based on very subtle observations and carefully exercised technique. That involves not only listening to a client but also looking for non-verbal elements of their communication. It also involves maintaining ‘presence’ – ‘holding’ a client – and pacing and leading a client – syncing into their mode of expressing themselves. These are all ways that a skilled coach can encourage and support a client in opening up and exploring their issues, their needs, and their possible strategies.

The sense of being uniquely heard – rather than processed – is fundamental to coaching, and this almost certainly can only happen in real time and in the moment. Software-enabled systems will no doubt have their place, and cost, will be a key driver of their future introduction and adoption, but it is difficult to imagine that they would ever override the deep and person-centred benefits of a ‘human’ person.  A response from an IVR system – no matter how sympathetic-sounding or intelligently derived from an algorithm – can never give that sense of authenticity that is core to any relationship.

Steve Paul, a transformational life coach/mentor, works with individuals wanting to find their purpose and build their strategies for fulfilled and happy work, social and personal lives. After holding senior roles with Phillps Electronics, IMB-Lotus, Harper Collins and the BBC, he spent 15 years as a digital strategist with leading agencies.

I have been working with my coach Claire for almost two years and quite simply she is brilliant! The skills and support... 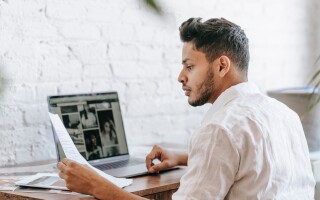 Are you part of one of those institutions that are oh-so familiar with a lack of engagement from their employees?...

My learning about LGBTQ+ matters has been too slow, but I am committed to better understanding all of the...

Why can't I multi-task?

If you, like me, were brought up to believe that we can multi-task, I hate to break it to you but you’ve...